SCG Muangthong Stadium is the home stadium of SCG Muangthong United Football Club. The stadium is a short walk from IBIS Bangkok IMPACT and opposite Novotel Bangkok IMPACT in Muang Thong Thani. Thailand Premier League football fans are familiar with this stadium. the reason is because the SCG stadium is famous for being the first official football stadium to operate in Bangkok and Thailand.

SCG Muangthong Stadium has several names including Yamaha Stadium and Thunderdome Stadium. The stadium can seat around 15,000 people. Open since 2010 after SCG Muangthong FC’s rise to the top division, the stadium is busy hosting football games and concerts. SCG Stadium is famous for hosting the reunion concert for the legendary rock band Guns N Roses in 2017. Also,SCG Muangthong United is one of Thailand’s leading football clubs. The team has 4 Thai League One championships, the highest-level competition for professional football in Thailand. SCG is well known and respected as a top football team in the country and in Asia.

Muangthong United Football Club is among the wealthiest clubs in Thailand. The team emblem comprises two qilins in a mirror image. The qilin is a mythical creature in Chinese and East Asian cultures which represents luck, good omens, prosperity, and longevity. So that, Fans call the emblem the “twin qilin” or Kirin and refer to the club as Kirin Warriors. The fan base  of the team is very large and spreads across Nonthaburi, Bangkok and Thailand. Ultra Muangthong is the fan club for ultimate SCG Muangthong fans. These loyal fans never miss a game at SCG Muangthong Stadium. They are always there, cheering, singing and waving large flags to support their favourite team.

On the left of SCG Stadium is the souvenir shop where fans can purchase jerseys, scarves and other team gear. The stadium is in Nonthaburi province just north of Bangkok city centre and is easily accessible by expressway. More than that, you will find many entertainments around the stadium, including IMPACT Speed park, Karaoke, bowling alley, Cinema and shopping centre.

For guests staying at IBIS Bangkok IMPACT with an interest in football,  feel free to contact our friendly team at reception about the games at SCG Muangthong Stadium. If you are lucky, watching a live game is a truly unique experience you should not miss,  the atmosphere is electrifying and the energy is always high.

Going to watch a match at SCG  Muandthong stadium with friends, how about make it like a party!  Drinking bees to celebrate, stay overnight with friends, no need to drive back and spend time on bad transport.  Then, you should choose the best hotel wisely. IBIS Bangkok IMPACT is the ideal hotel for you. only 5 minutes walk from the stadium, this 3-star hotel is the best value hotel near  SCG stadium. You can check-in before the match started, leave your belongings in the comfort room, and get back to the room first time when it finishes. Choices from standard queen room or twin room, all rooms are modernly decorated with full facilities that you need. the signature Ibis sweet bed will guarantee you have a sweet dream after the exciting day.

Open 24 hours, Serving light meals and drinks around the clock in a laid-back and easy-going décor. Ibis café and Bar is the best place for you and your friend to gathering after the game. If cups of beer are what you need, then you are right on the spot! No matter how late is it, just join us, we ensure you and your friend will have a perfect football night! 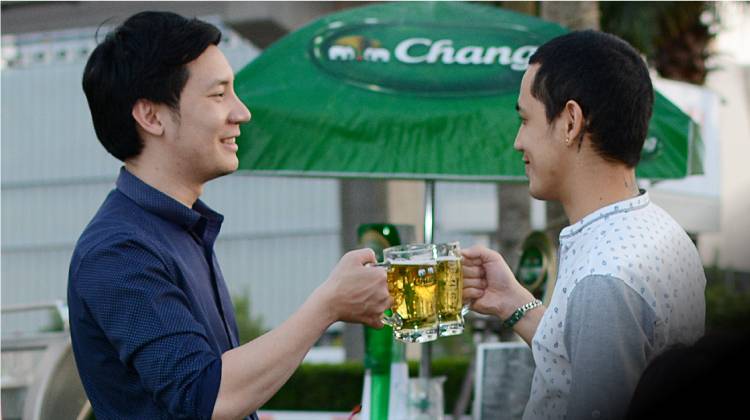